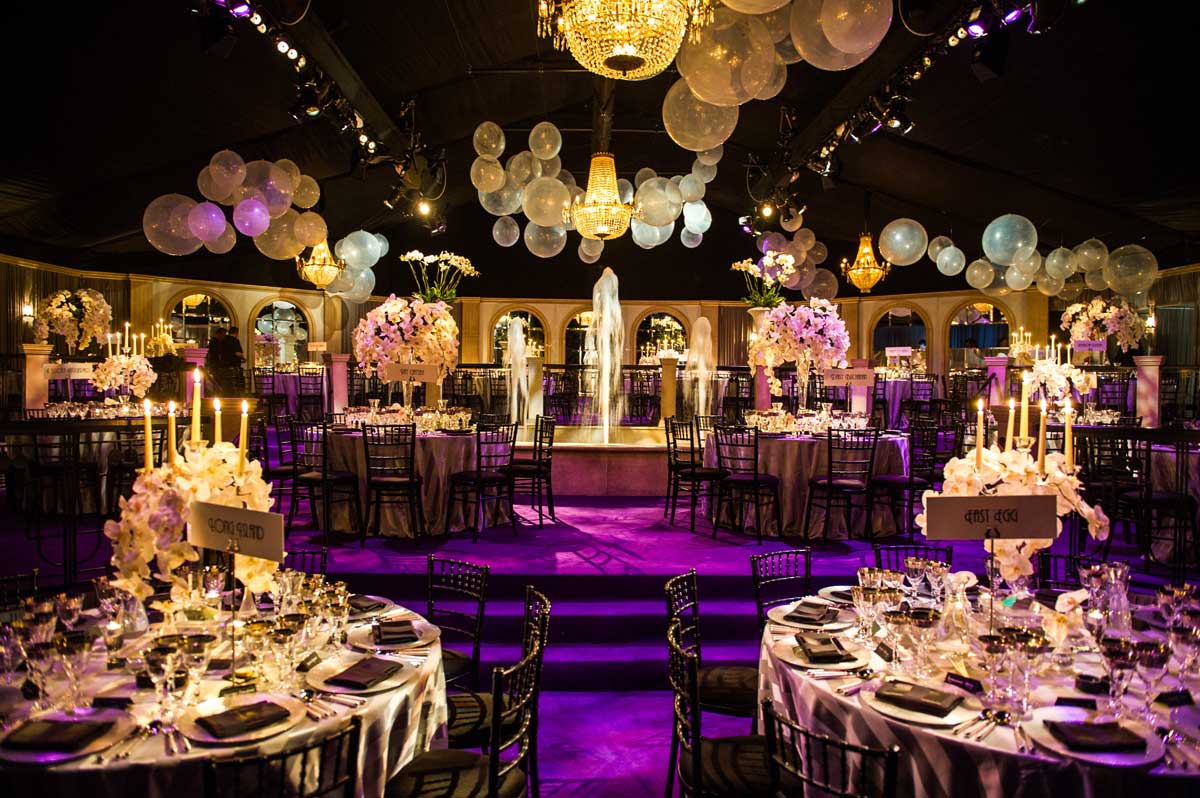 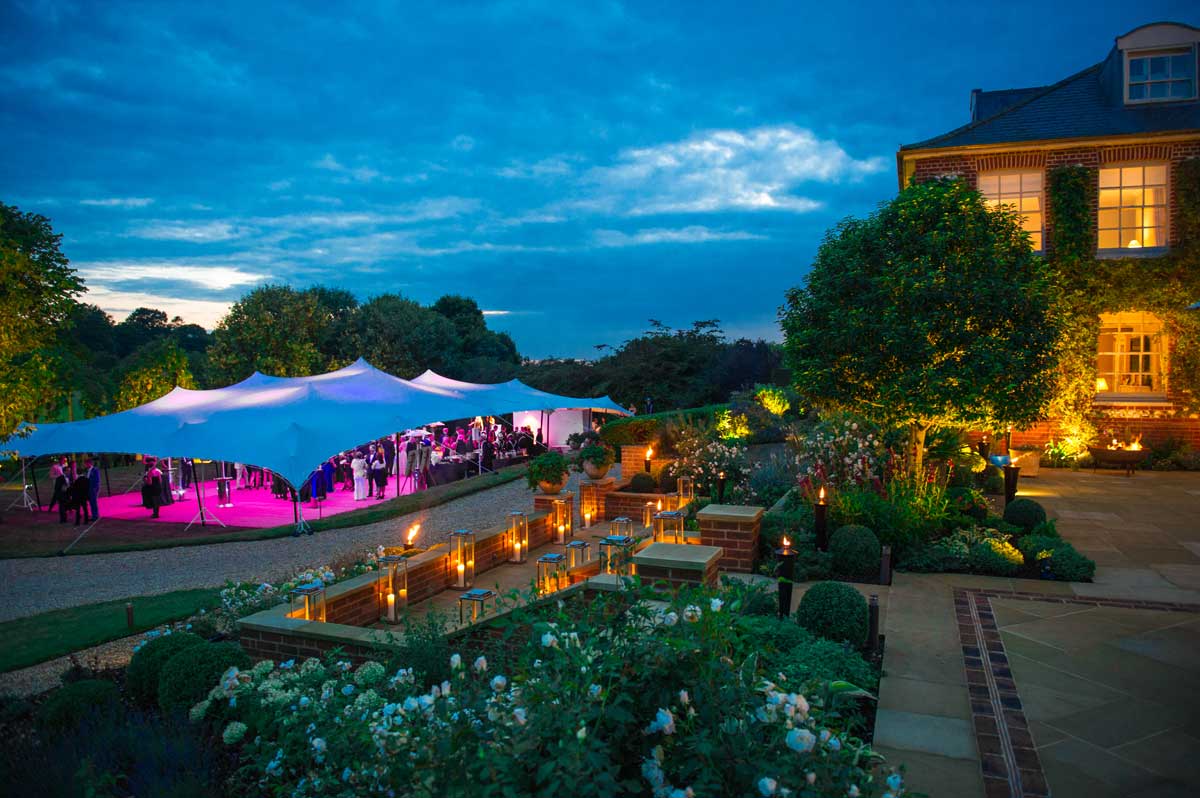 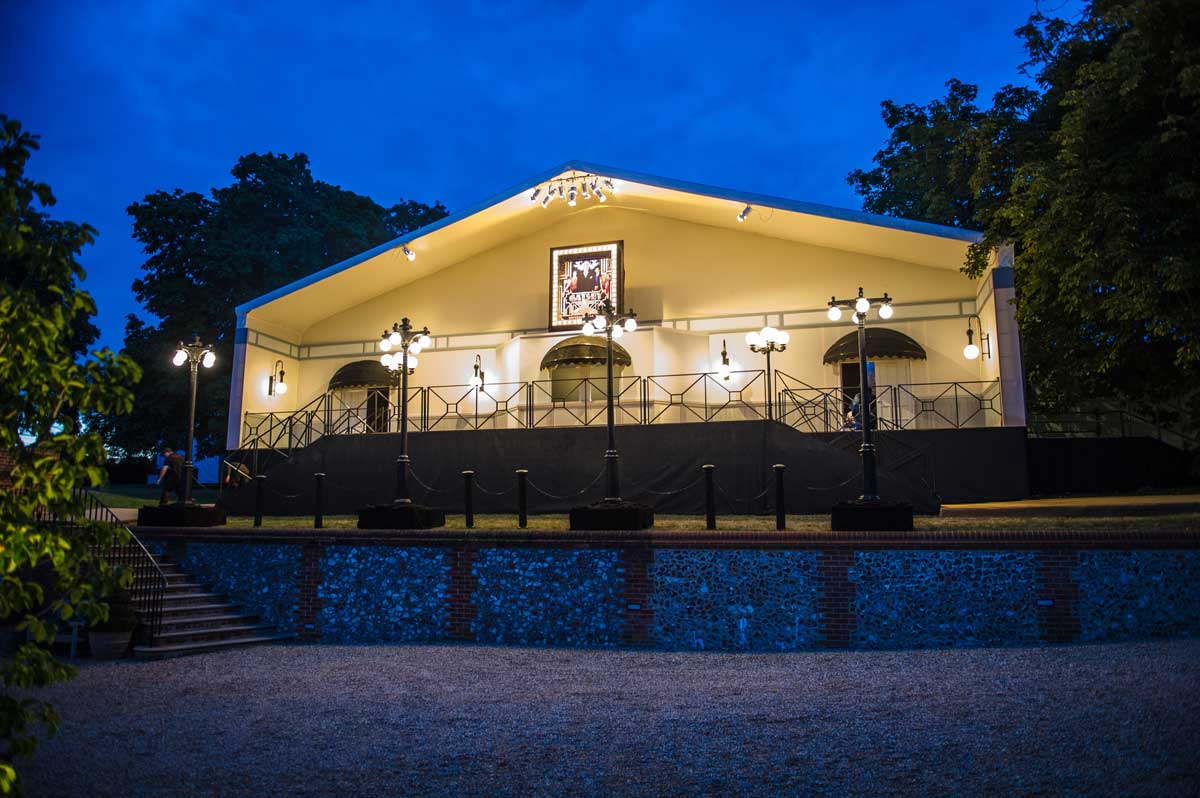 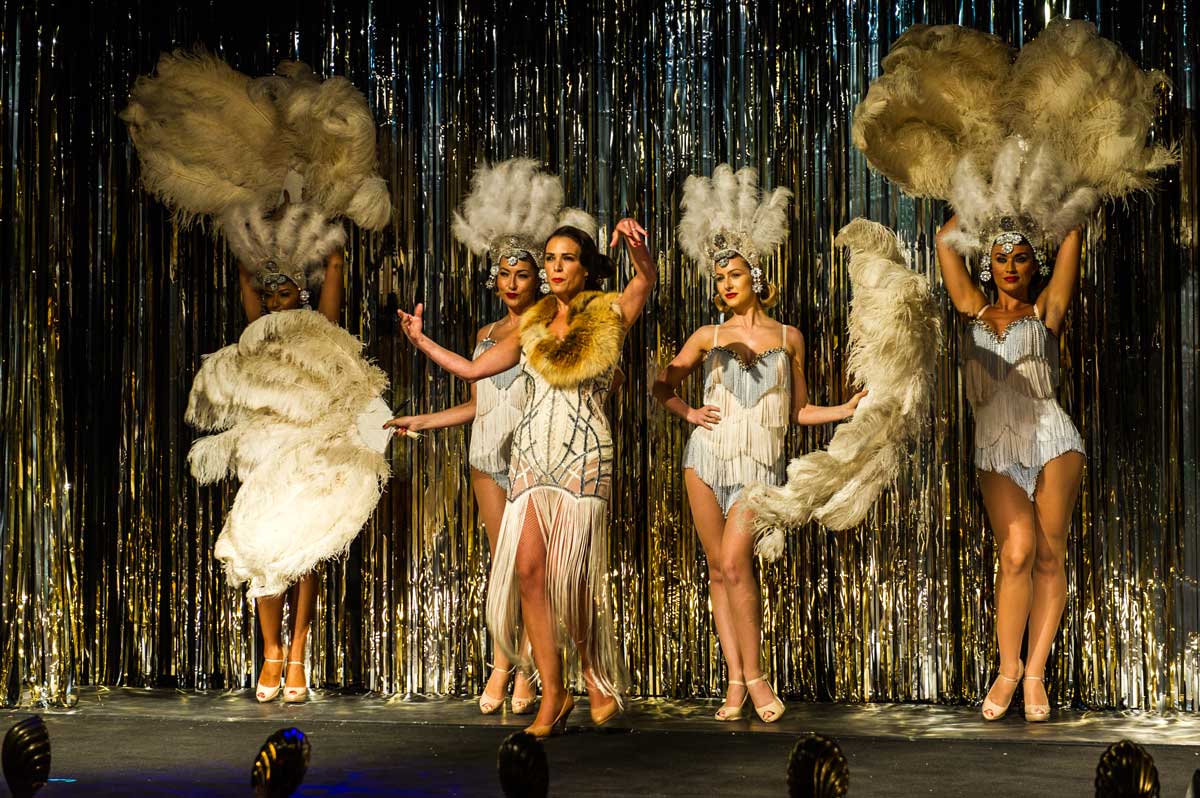 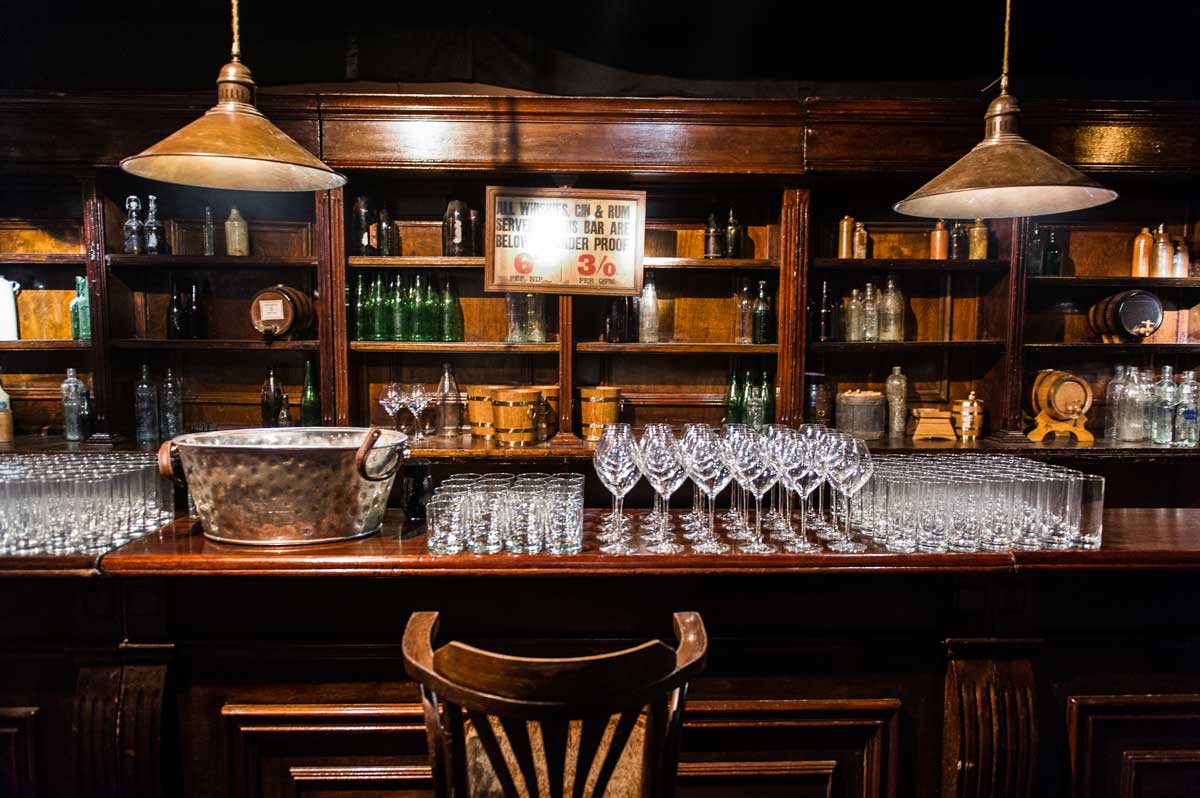 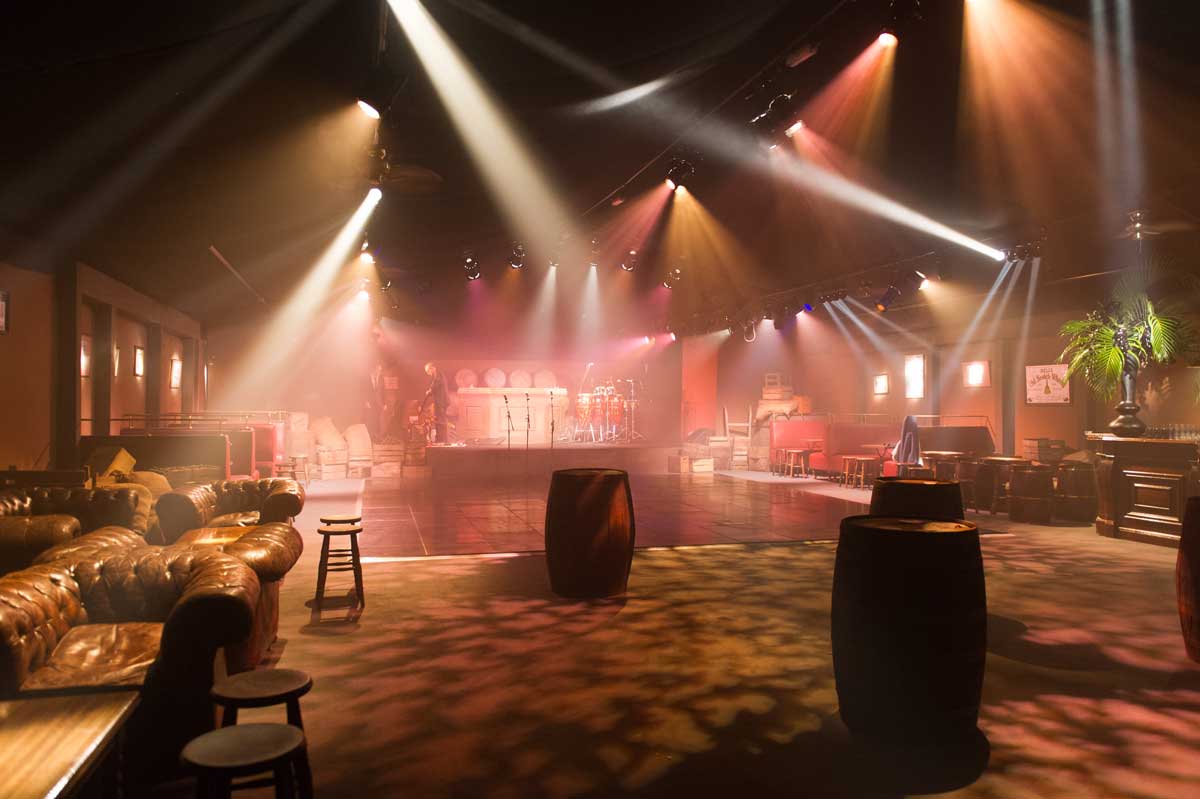 When a client’s 21st Birthday coincides with his parent’s 25th Wedding Anniversary, a big party to celebrate at their home in Wiltshire is definitely required! On a warm September evening “men and girls came and went like moths among the whisperings and the champagne and the stars”…A Great Gatsby extravaganza was created.

Guests, dressed in a plethora of feathers, lace, fringing and show stopping shimmer, arrived at the house to be met by “paparazzi” of the era frantically trying to get shots of the glamourous crowd; instantly setting the scene of the seduction of what was to come. A large open sided stretch tent on the lawn in front of the house, provided space for the drinks reception. Two living canapés characters, dressed in lavish feathered costumes, dripping with crystals helped to serve canapés, moving throughout the guests creating a fabulous talking point. With the soothing tones of a sparkling vintage inspired singing duo, guests were toe tapping from the off.

As the sun set, guests were encouraged to make their way to the next part of the evening; a spectacular custom built theatre style marquee built on the slope of the lawn. Making their way, guided by vintage style lampposts and flickering candles in tall lanterns, they arrived at the Gatsby ticket office where two glamorous ladies took their tickers for the evening. Above the ticket office was a bespoke made Great Gatsby poster with a difference; Leonardo Di Caprio was nowhere to be seen, instead the family had been expertly inserted into the poster, complete with the family dog!

On entering the marquee, the guests were astounded by what was to be seen. Two tiers of tables surrounded a huge gushing bespoke painted “stone” fountain. A deep luxurious purple carpet complimented the sumptuous white lily table centres which sat on silver Tudor striped cloth, all adding to the glorious glamour of the decade being recreated. With French window style glass panels running around walls, it was easy to forget this was a marquee structure and that guests were seated in Gatsby’s Ballroom.

Throughout the dinner guests were treated to two special pieces of entertainment; a high energy, high skilled, fast paced hooptastic show finishing with over 40 hoops being spun at one time! The final show after pudding was a bespoke show stopping medley of Gatsby inspired songs and dances performed by West End stars which had everyone in the dancing spirit.

As gold confetti burst into the air at the end of the show, the mirror panels at the back of the marquee slid open to reveal a hidden Prohibition Inspired dancing area; a stark yet mind blowing contrast to the luxurious décor of dinner. With cocktails flowing, the band played long into the night (as every illicit establishment would expect) with the guests having what can only be described as a Roaring good time!